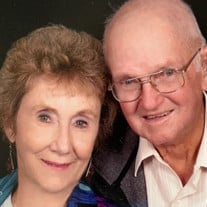 William &#8216;Bill&#8217; Lee Butler passed away quietly Sept. 13, 2021; five days short of his 99th birthday with family by his side. Bill was born in Carthage, Ark. to William Franklin Butler and Carry Bell House Butler. Bill was the second... View Obituary & Service Information

The family of William & Lillian Butler created this Life Tributes page to make it easy to share your memories.

Send flowers to the Butler family.