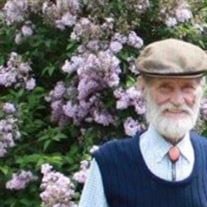 Ward Lowell Hartzell, of Twisp, was born to Richard and Mary (Williams) Hartzell in Yakima, WA on December 29, 1930. Ward was the second of four sons and grew up in Tacoma, WA. Ward Hartzell was 91 years old at the time of his death on December 31, 2021. He was a lifelong Christian and held strong beliefs. He remained faithful to the end. Ward served in the United States Air Force until his honorable discharge in 1959. He studied biology at University of Puget Sound and subsequently worked at Cargill, Incorporated, Seattle, Washington. He met Bernice Rupp through an early computer dating service. They were wed on Dec. 26, 1964. The Seattle Post-Intelligencer carried the front-page headline, “Cupid Computer Clicks for Compatible Couple.” Ward often spoke of the honeymoon in Europe they so enjoyed, compliments of the dating service. Through the 1970s, Ward owned and operated a successful landscaping business in Mount Lake Terrace, Washington and served many homes and businesses in the Seattle area. In 1979, the family moved to Twisp, where they homesteaded on property just below McClure Mountain. Ward worked hard developing the property and building their home. Ward continued to work on his property throughout his life. It wasn’t until 1990 that phone service was connected, and electrical service in 2007. He and Bernice planted a large garden every year and he enjoyed tending that and taking care of the chickens. Ward enthusiastically shared God with others, and wrote many letters to the Editor of the Methow Valley News. He also enjoyed the close fellowship of church family at Omak Seventh-day Adventist Church where he and Bernice attended. Ward is survived by his son Derek (Sara) Hartzell of Twisp, and grandson Ethan; son Craig Hartzell of Edmonds, Washington, Terri Hartzell, of Renton, Washington, and grandchildren Nathan and Kaylin; daughter Janet Evans of Greybull, Wyoming, and grandchildren Roger “Martin” (Kelly) and Lexie; brother Clay Hartzell of Winlock, Washington; sisters-in-law Luz Hartzell of Kirkland, Washington, Marcile Nofziger of Archbold, Ohio, and Margaret (Carl) Smeltzer of Harrisonburg, Virginia; and wives of his brothers-in-law, Jueldine Rupp of Lake Wales, Florida and Peggy Rupp of Pettisville, Ohio. He was preceded in death by his wife of nearly 55 years, his parents, his brothers, Barton Hartzell and Allen Hartzell, his son-in-law Roger Evans (by one week), his infant granddaughter Aleah, sisters-in-law Winifred Hartzell, Melva (Doyle) Short, Betty (Cliff) Liechty, an infant sister-in-law, Janice Rupp, and brothers-in-law Lowell “Sie” Rupp and Roger Rupp. There will be a memorial service at Omak Seventh-day Adventist church in Omak on Sunday, February 13, at 11 a.m.

Ward Lowell Hartzell, of Twisp, was born to Richard and Mary (Williams) Hartzell in Yakima, WA on December 29, 1930. Ward was the second of four sons and grew up in Tacoma, WA. Ward Hartzell was 91 years old at the time of his death on December... View Obituary & Service Information

The family of Ward Lowell Hartzell created this Life Tributes page to make it easy to share your memories.

Ward Lowell Hartzell, of Twisp, was born to Richard and Mary...

Send flowers to the Hartzell family.