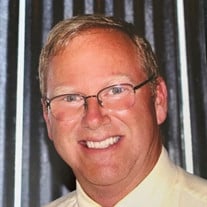 Not sure what to send?

Timothy James Patrick was born on December 11, 1962 and passed away June 13, 2022. He was born in Yakima Washington to Robert and Sandra Joan Patrick. Tim joined his family of two older brothers: Robert (Bobby) and Richard (Ricky). The Patrick family lived in Yakima, Ellensburg, Federal Way and finally landed in Yelm Washington, as his dad worked for the Washington State Highway Department. Tim graduated from Yelm High School in 1981 and attended Central Washington University in Ellensburg. It was at CWU that Tim met Paige Peterson of Kent on the first day of school, they dated for three years and married in 1985. While attending CWU, and completing a Communications degree, Tim worked as a full-time photographer at the Ellensburg Daily Record, interned at the Seattle Times and worked on and off for the Wenatchee World. In 1988, after college, Tim and Paige moved to Okanogan Washington when Paige accepted a position at Okanogan School High School as a Family Consumer Science Teacher. The plan was to work for a year and then head back to the “Coast”, closer to family: that never happened! Tim opened Tim Patrick Photography in 1990 from the basement of their home in Okanogan. Tim took family, wedding and graduation pictures throughout the Okanogan County. In 2009 when the economy changed and so did the photography industry. Tim started focusing on sport team photography and this became the main clients of his business. Tim also loved taking photos for the Omak Stampede, the Okanogan County Fair, the Loup Loup Ski Bowl and more recently, his precious granddaughters! Robert Clinton was born to Tim and Paige in 1992 and Ian-Aisling joined the family in 1996. Tim was very involved with the kids’ school, sports and especially scouting. He froze with them at ‘Winter Camp’, hiked with them at the Scout Ranch, and joined them for many, many scouting events. Rob and Ian were the reason Tim and Paige stayed in Okanogan, as this became the perfect place to raise a family. Tim survived melanoma cancer in 2014 and was in remission. In March of this year he was diagnosed with Secondary Metastatic Melanoma in his right lung. He was optimistic he could survive it again. Unfortunately, the tumor was aggressive and did not respond to treatment. Tim began Hospice care on Wednesday and passed away 5 days later. We thank Hospice for their love and care for Tim during this time. Tim is survived by his wife of 37 years, Paige, whom he adored. His mother, Sandra Joan Patrick of Yelm; his brother Richard of Mount Vernon and his children Cody and Carly, Tim’s children Robby (Nicole) of Omak. His transgender daughter Aisling (given name Ian) of Okanogan, as well as his granddaughters, Emma and Isabella. Tim was loved by many Peterson siblings, cousins, nieces and nephews and often served as the family photographer at Christmas, weddings and graduations. Tim and Paige also have special exchange daughters they have kept in contact with, Elodie from Belgium and Emmy from Sweden, who hold a special place in their hearts. Tim was welcomed into heaven by his grandparents Patrick and Hiatt. His father, Robert, his father-in-law Clinton Peterson and his brother, Robert (Bobby). Tim’s love for life exuded to all he encountered. He was a doer and loved to “seize the moment”. He could often be seen around the neighborhood on the Alta-Vista water district Ranger, checking on valves, fixing leaks, and visiting neighbors. Tim was involved in the Omak-Okanogan Rotary club for many years, and truly believed in their moto: Service Above Self. Contributions may be made to the Omak-Okanogan Rotary Vocational Scholarship Fund in Tim’s name at PO Box 2031, Omak, 98841. Services will be held at the Okanogan County Agriplex on Wednesday, June 29th, 2022 at 4:00 pm. A social gathering with a no host bar will be held prior to the Service on Tuesday evening, June 28, from 7:00 pm to 10:00 pm, at the 12 Tribes Casino Loggers Pub.

Timothy James Patrick was born on December 11, 1962 and passed away June 13, 2022. He was born in Yakima Washington to Robert and Sandra Joan Patrick. Tim joined his family of two older brothers: Robert (Bobby) and Richard (Ricky). The Patrick... View Obituary & Service Information

The family of Timothy James Patrick created this Life Tributes page to make it easy to share your memories.