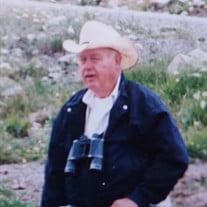 Theodore Carl Walter Feddersen, 94, passed away February 3rd 2022, at Fieldstone Assisted Living in Wenatchee, WA. Ted was born May 16th 1927, In Molson, WA to Martin Feddersen and Catherine Wildermuth. He was raised in the Okanogan Highlands with two sisters, Clara and Lydia and two brothers, Edwin and Paul. Ted Married Jennie Alex, December 17th 1949 – referring to her often as his Best Friend. Jennie preceded Ted in death on Dec. 4th 1991. They had 6 children, Anthony Feddersen, Yvonne Passmore, Joseph Feddersen, Vicki Harlan, Tim Feddersen, Lincoln Feddersen, 6 grandchildren, and 5 great-grandchildren. He re-married on January 1st, 1997 to Elaine Miller. They lived together in Omak at Brooks Tracts. He was a member of the Trinity Lutheran Church in Omak. He worked the lumber mill in Omak for 44 years starting at Biles-Coleman in 1945 until his retirement in 1989. He was awarded and recognized as their longest working employee. Camp, hunting, fishing and woodworking were his life-long passions. Fishing and camping, especially at Bonaparte Lake with Jennie and later Elaine occupied many summers. They spent many days and nights there, returning home with many fish stories. He also enjoyed traveling and playing cards, especially pinochle. His road trips to Alaska and the Southwest were often a topic in his conversations. Ted liked to say that he drove all over the country and never received a traffic ticket and never once go into and fender bender. He also enjoyed woodworking, as he spent many hours in his shop, making chairs and tables for friends and family. To attend the service, you must have had the covid vaccine or a recent negative covid test. A Visitation will be held from 3:00 PM until 5:00 PM, Thursday, February 10th 2022 at the United Methodist Church, 130 Cedar St. N, Omak, WA 98841 The service will be February 11th 2022 at 11:00 AM at the Immanuel Lutheran Church, Havillah, WA. There will be no reception because of Covid. In lieu of flowers, donations may be made to: Omak Food Bank or any Food Bank of your choice in Ted’s name.

Theodore Carl Walter Feddersen, 94, passed away February 3rd 2022, at Fieldstone Assisted Living in Wenatchee, WA. Ted was born May 16th 1927, In Molson, WA to Martin Feddersen and Catherine Wildermuth. He was raised in the Okanogan Highlands... View Obituary & Service Information

The family of Theodore Feddersen created this Life Tributes page to make it easy to share your memories.

Send flowers to the Feddersen family.