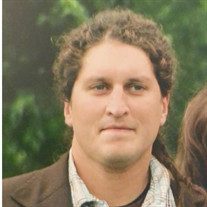 It is with great sadness that the family of Ryan Ray Desautel announce his sudden passing on January 7, 2022, at the age of 45. Ryan was taken away far too soon but his memory will forever be in our hearts. Ryan was born in Omak, WA, on January 6, 1977, to Edward Desautel and Rhonda (Miller) Powell. He graduated from Omak High School in 1995. He participated in football, basketball, and baseball - lettering in football and baseball. Ryan attended Fort Lewis College in Durango, CO, where he studied Native American Indigenous Studies with a minor in Archaeology. His desire for learning never ended. He learned to speak Spanish, French, and the native language of Salish. Ryan was a member of the Colville Confederated Tribe. Ryan began his career as a firefighter with the Coeur D'Alene Tribe in 1996. He was then hired on with the Pleasant Valley Hotshot crew in Young, AZ, in 2001. In 2004, he became a smokejumper and was stationed at the Grangeville Idaho Smokejumper base. He traveled all across the United States parachuting into remote forest fires. He jumped over 300 times throughout his career. He fought fires in California, Hawaii, Florida, Alaska, and New England just to name a few. In the off season, he would continue to work for the government which included traveling to the East Coast and climbing trees in search of an invasive species of beetles. If he wasn't working, he loved to travel abroad - his favorite country being Argentina. After ending his career as a smokejumper, he continued to work in fire management. Ryan had a tremendous passion for the outdoors, whether it be fishing or camping. He enjoyed running and participated in at least 3 marathons. He loved all sports, reading, and had a soft spot for all animals. He had a profound interest in the Native American culture and traditions. Ryan was a unique, kind, caring person with an adventurous spirit. He loved his son, Rudy, his family, and all of the countless friends he had made throughout his lifetime. Ryan is survived by his parents, Rhonda (Miller) Powell, Thomas "Garth" Powell of Omak, WA, and Edward Desautel of Inchelium, WA, his son, Rudy Ray Bonatti of Montrose, CO, his sister, Heather (Desautel) McCarthy (Patrick) of Deer Park, WA, and his brother, Gregory Desautel of Corona, CA, nephews, Patrick and Nicholas McCarthy of Spokane, WA, and niece, Alexis Desautel of Washington D.C., as well as his aunts, uncles, cousins, and his beloved dog, Dexter. He is preceded in death by his grandmother, Stella Miller. There will be a Celebration of Life held in his honor in the Spring of 2022. The date and location to be determined. The family would love to have any stories and/or photos of Ryan be shared through Facebook or emailed to [email protected] for the Celebration. In lieu of flowers please consider planting a memorial tree as a tribute to Ryan. https://www.rivervalleyfuneral.com/store/funeral-sympathy-flowers/memorial-trees

It is with great sadness that the family of Ryan Ray Desautel announce his sudden passing on January 7, 2022, at the age of 45. Ryan was taken away far too soon but his memory will forever be in our hearts. Ryan was born in Omak, WA, on January... View Obituary & Service Information

In lieu of flowers please consider planting a memorial tree as a tribute to Ryan. https://www.rivervalleyfuneral.com/store/funeral-sympathy-flowers/me

It is with great sadness that the family of Ryan Ray Desautel...

Send flowers to the Desautel family.