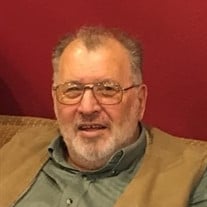 On Saturday, February 12, 2022, Dad received a call from the home office. After years of expectation, his promotion finally came through. His present cover-alls, adequate for earthly labors, no longer represented the status of his elevated state. The time had come for him to lay aside his work clothes and put on the vestments of eternal life. For over 45 years, dad followed the way of the gospel, seeking the kingdom of God; albeit imperfectly. Sometimes he stepped off the path, sometimes he failed to seek the kingdom as he should; however, the inertia of his faith pushed him closer to his heart’s desire. At last dad’s desire is fulfilled as he finally experiences the completed promises of the kingdom of God and His gospel. 1Jn 5:10-12-- Whoever believes in the Son of God has the testimony in himself. Whoever does not believe God has made him a liar, because he has not believed in the testimony that God has borne concerning his Son.11 And this is the testimony, that God gave us eternal life, and this life is in his Son.12 Whoever has the Son has life; whoever does not have the Son of God does not have life. Dad’s joy is complete, but we grieve our loss. Now, we must walk the gospel path a little off-balance due to his absence. Yet, we too have the same desire for ourselves and our children. We too believe the gospel and seek God’s kingdom. For we who believe, death is not good-bye but rather, we’ll catch-up later. Revoe Stuart (Sam) Hill II was born May 15, 1942 in Santa Ana, California to Army air corps. pilot Capt. ReVoe S. Hill and Alice Marie Newlon. After WWII the family moved to Fremont, Nebraska where Sam grew up with his 2 brothers, Daniel and Wayne. Sam entered the Marine Corps. in 1961 and a year before his discharge in 1965 he met, and married Rennie Joy Wood before the Justice of the Peace in Las Vegas, Nevada. After experiencing a miraculous healing in 1975, Rennie received the testimony of the gospel and led Sam to receive that testimony for himself. A year later, Rennie and son Aaron died in a car accident. Sam, with children Bud and Heather, survived. In 1981, while attending Christ for the Nations Institute of Dallas, Texas, Sam married Sandra Jean Klock and they had two children, Debbie and Ben. Unfortunately, Sam and Sandra divorced in 1993. After moving to Omak in 2003, Sam married Kathy Brantner in 2005 and the two of them were inseparable until his recent passing. Sam’s life story covered 11 states and 2 continents as soldier, roughneck, civil servant, police officer, carpenter, traveling salesman, janitor, and fabricator; a life well-lived. Sam Hill is survived by his wife Kathy, his brother Dan, 4 children, 3 step-children, 18 grandchildren and 4 great-grandchildren. Funeral services will be held at Lighthouse Chapel in Riverside on February 24th at 1:00, with military honors ceremony to follow at the Omak Memorial Cemetery at 3:00. In lieu of flowers, the family asks donations be made to the Disabled American Veterans (DAV) foundation.

On Saturday, February 12, 2022, Dad received a call from the home office. After years of expectation, his promotion finally came through. His present cover-alls, adequate for earthly labors, no longer represented the status of his elevated state.... View Obituary & Service Information

The family of Revoe Stuart Hill, II created this Life Tributes page to make it easy to share your memories.

Send flowers to the Hill family.