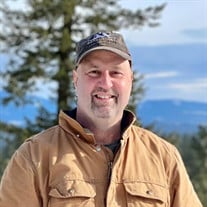 Martin (Marty) Edward Fritz, 58, peacefully passed away on January 8, 2022 after a courageous two-year battle with brain cancer. Marty was born in Soap Lake, Washington on August 23, 1963 to Francis and Betty Fritz. He was the youngest of three, behind his brother, Bob, and sister, Claudia. Growing up on small farms, Marty fell in love with exploring the outdoors, working with his hands, and caring for animals. His favorite animal on the farm was his horse, Stormy. Early in his life, Marty had to undergo heart surgery to correct a congenital heart defect. But he never slowed down, and became a high school football player, wrestler, and equestrian. Marty graduated from West Valley High School in Yakima in 1981 and received a bachelor’s degree in Electrical Engineering from Washington State University in 1985. Marty then moved to the Seattle area, where he started his career at Boeing. Marty was always fascinated by air and space travel, and he was very proud of the work he did for Boeing in their Space & Defense department. The Society of Automotive Engineers awarded Marty for his work on Aerospace Standard 1773 (AS1773), a fiber-optic communication standard that was used in at least two different space flights in 1997 and 2001. Even in Seattle, Marty remained a cowboy at heart. His cowboy boots caught the eye of Lori, and the two quickly fell in love. They enjoyed sailing, skiing, camping, and riding his motorcycle together. They raised their three children to also love adventure. Marty and his family moved from Seattle to Spokane in 2000, and he worked at the Liberty Lake branch of F5 for 20 years. He was a Principal Hardware Engineer designing the hardware used by some of the world’s biggest technology companies to handle internet traffic and security. Still, he always made time to cheer on his sons in their many sports and other events. One of Marty’s favorite places in the world was his family’s lake cabin in the Okanogan Mountains, where he spent countless weekends and vacations fishing, hiking, hunting, snowmobiling, reading science fiction, and relaxing by the fire with his wife and sons. In 2017, Marty completed the construction of his dream home in North Spokane, where he was able to stay and enjoy an amazing view of Mt. Spokane until his final days. He was preceded in death by his parents, Betty and Francis, and his brother, Bob. Marty will be dearly missed by his wife, Lori; their three sons, Jared (Elizabeth), Luke, and Adam; his sister, Claudia; his large extended family; and his many friends. Marty was deeply grateful to all of his family and friends who supported him during his fight with cancer, including his colleagues at F5; his pastor and community of fellowship at St. Luke’s Lutheran Church; his care team, Dr. Gourley, Dr. Carlson, Dr. Lee, and Dr. Graber; and his caregivers at Hospice of Spokane. A graveside service for Marty will be held in Omak at the Tunk Valley Cemetery on January 21 at 11:30 am. A memorial service for Marty will be held at St. Luke’s Lutheran Church in Spokane on January 22 at 11:00 am. In remembrance of Marty’s life, the family asks that any charitable donations be made to Union Gospel Mission. In lieu of flowers, please feel free to share a comment or memory in tribute to Marty.

Martin (Marty) Edward Fritz, 58, peacefully passed away on January 8, 2022 after a courageous two-year battle with brain cancer. Marty was born in Soap Lake, Washington on August 23, 1963 to Francis and Betty Fritz. He was the youngest of three,... View Obituary & Service Information

In Lieu Of Flowers Please Feel Free To Share A Memory or Comment In Tribute To Marty.

Send flowers to the Fritz family.