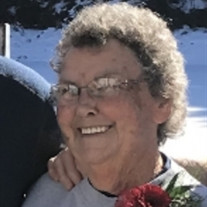 Karen (Reinke) Wehmeyer Kennedy was born on December 26th 1944 (18 minutes after her sister, Kathy) to Walt and Mable (Ritz) Reinke in Omak, WA. Karen passed away January 18th 2022. She spent her early life in Omak and was a 1963 graduate of Omak High School. In January, 1965 she took a train from Wenatchee, WA to Boston, MA to spend a month vacationing with her sister and brother-in-law. Within a week she went to work for the John Hancock Life Insurance Company in Personnel/Salary Administration and her vacation turned into a three year stay. After moving back to Omak she went to work for the U.S. Forest Service at the Tonasket Ranger District prior to transferring to the Supervisor’s Office in Okanogan as Payroll Clerk. In the Summer of 1972 she flew as an Aerial Observer for the Forest Service checking for forest fires was her favorite job. In November 1968, she married Steve Wehmeyer. Two son were born from this marriage, Shane and Bret. They lived in Twisp, WA for three years prior to returning to Okanogan. Karen then went to work for the Omak-Okanogan Chronicle as Office Manager. She and Steve divorced. At 8:00 on November 30th 1983 Karen met Bob Kennedy on a blind date (the love of her life) and they were married at 8:00 on November 30th 1984. They lived in Spokane, WA. Karen gained three step children from this union; Tony White, Stephanie Kennedy and Ryan Kennedy. Bob worked for the telephone company and Karen worked for Metallic Arts as Office Manager/Credit Manager. In 1985 they bought a farm in Elk, WA and raised Black Angus cattle. In 1991, Karen went to work for Rowand Machinery as Credit Manager. In 1998 Bob was transferred to Caldwell, Idaho. They lived in Nampa, ID. While in Idaho Karen worked for Albertson’s Grocery in Nampa and Meridian. Bob retired in 2005 and they moved to Okanogan, WA. Karen became one of the original employees and helped open, The Home Depot in Omak and worked there until she retired in 2016. Karen was a breast cancer survivor. She was diagnosed in January, 1991, and had a bi-lateral mastectomy. Karen is survived by her husband, Bob, two son, Shane Wehmeyer and Bret (Suzie) Wehmeyer, her twin sister Kathy (Jerry) Digan, her three stepchildren, Tony White, Stephanie Kennedy and Ryan Kennedy. She is also survived by six grandchildren and five great-grandchildren. She was preceded in death by her parents, her sisters Patricia Reinke and Marcia (Raymond) Harris, her brothers, Jim Reinke and Steve Reinke and her nephew Paul Reinke. In lieu of flowers please make contributions to St. Judes or Shriners Hospital for Children. The family with have a celebration of life sometime in the Spring of 2022

Karen (Reinke) Wehmeyer Kennedy was born on December 26th 1944 (18 minutes after her sister, Kathy) to Walt and Mable (Ritz) Reinke in Omak, WA. Karen passed away January 18th 2022. She spent her early life in Omak and was a 1963 graduate... View Obituary & Service Information

The family of Karen Louise Kennedy created this Life Tributes page to make it easy to share your memories.

Send flowers to the Kennedy family.