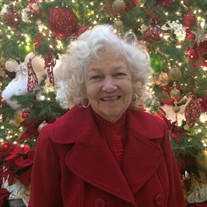 Janice Lee Mitzner (87) of Spokane Valley, WA passed away on December 8, 2021. Born on May 3, 1934, in Okanogan, WA, she was the third of four children and only daughter of Earl and Emma Burnett. Janice grew up on her family’s beloved cattle ranch where her free time was spent riding her horse, swimming at the lake, practicing piano, and playing with her cousins in the playhouse her father built. She graduated from Okanogan High School where - always with a pep in her step - she was a majorette, cheerleader, 4-H member, and played on the tennis team. After graduating, Janice attended business school in Everett, WA and shortly thereafter, married Gay Mitzner with whom she bought the John Deere dealership in Chewelah, WA and raised her four children. Upon moving to Chewelah, WA, Janice immediately became involved in the community; she was an active member of St. Paul’s Lutheran Church, taught Junior Lutherans, was a 4-H leader, and belonged to the United States Junior Chamber of Commerce. She was very involved in Democratic politics. In addition to being Stevens County Democratic Chairman for many years, Janice was a delegate to the Democratic National Convention in 1972 and 1976. During this time, she also reveled in her most treasured position – that of a mother. The perennial driver to all of her children’s many activities and functions, Janice made everyone feel welcome and her house was a revolving door for all of her children’s friends. After raising her children, Janice began selling real estate in Stevens County and after her divorce, moved to Spokane Valley, WA where she continued her work in real estate; involvement in Democratic politics, starting a Women’s Democratic Club; and her love for dancing, frequently attending the Spokane Valley Eagles. In addition to being a constant fixture at her grandchildren’s events, Janice also had a sense of adventure and curiosity, traveling western Europe, eastern Europe, and the United Kingdom with her oldest daughter, Dianna. Family was the most important thing to Janice. Her children and grandchildren brought her tremendous joy. She will be missed by all who knew her and whose lives she touched. She will be remembered as a beautiful, fun, loving mother, grandmother, and friend with her sparkling blue eyes, warm smile, and infectious laugh. Her kind and generous heart touched many individuals and families. She had a strong moral compass, a commitment to the special bonds of family, and a ready willingness to assist anyone in need. Janice is survived by her four children: Dianna Mitzner, Sherry Schnell (Dan), Steve Mitzner (Jeri), Jeff Mitzner (Gwen); Jeanne Mitzner; eight grandchildren: Michelle Hrle, Amanda Swartzel, Marcie Wetzler, Mallroy Gonwick, Jacob Mitzner, Myriah, Harrison, Valkryie Weather, and McKenzie Schnell; and sixteen great-grandchildren, as well as, her youngest brother Daniel Burnett. Janice was preceded in death by her parents; her brothers, Neil Burnett and Howard Burnett; and special family member, Sidney Palmanteer. Her family would especially like to thank her caregivers of three and a half years, especially Jasmina. A private funeral and burial was held on December 18th in Okanogan, WA.

Janice Lee Mitzner (87) of Spokane Valley, WA passed away on December 8, 2021. Born on May 3, 1934, in Okanogan, WA, she was the third of four children and only daughter of Earl and Emma Burnett. Janice grew up on her family&#8217;s beloved... View Obituary & Service Information

The family of Janice Lee Mitzner created this Life Tributes page to make it easy to share your memories.

Janice Lee Mitzner (87) of Spokane Valley, WA passed away on...

Send flowers to the Mitzner family.