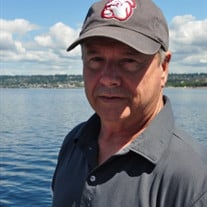 James Douglas Todd, loving husband, father, and grandfather, was called home to the Lord on January 6, 2022. He was born on January 23, 1952 in McAlester, Oklahoma to Lewis and Hazel (Gordon) Todd. He was preceded in death by his parents, brothers David and Clinton, and daughter-in-law Bekah Todd. In his early childhood, his family moved with the harvests between Prosser and Okanogan. He was raised on the Johnny Appleseed orchards, and began working there at a young age. He spent 41 years working in the orchards in various capacities and raising his family. In high school, he always had a love of sports, playing both football and baseball for the Bulldogs. After graduating from Okanogan High School in 1970, he attended Yakima Valley Community College, where he would meet the love of his life while cruising Yakima Avenue. After dating and becoming best friends, Jim proposed to Leslie Jeanne Stohl on her birthday. They were married on March 2, 1973 in Yakima. Once married, they briefly lived in San Antonio,Texas, where his baseball coaching career began, alongside his eldest brother Lloyd. He spent countless years being involved in the Okanogan youth baseball program, in both a leadership role and as a coach. It became a family pastime, with his young children hanging out at the field and Leslie as his scorekeeper. All of his children spent their childhoods on the baseball and softball fields. When his daughter Kelly became interested in fastpitch softball, he began coaching her teams until she was about 16. His influence on his players will stand for generations. He also spent many years playing men’s slowpitch softball, and he was a founding member of the Okanogan Jaycees. After his children graduated and moved away from Okanogan, he still loved attending Bulldog sporting events. In 2019, Jim and Leslie were recognized as boosters of the year by the Okanogan Athletic Booster Club. In 2005, he was “volun-told” to help Leslie with the Washington State Nashville Country Star singing competition. He came up with the song ideas for the dance numbers that started off each championship show. These songs were often hits from the 1950s and 60s. He soon became involved in every aspect of the program. He made his acting debut when he performed a skit as Jerry Clower. He was also the main lip syncer for a skit using the song “Man of Constant Sorrow.” He gave his life to Christ and was baptized in 2001 into the General Assembly and Church of the Firstborn, where he was admired for his great faith. He looked forward to church campouts and visiting with the brethren, even if it was the only vacation he got during the busy orchard season. After his baptism, he began making walking sticks out of wood he would find in the orchard. He took great pride in his craft, and burned a cross and a scripture verse into each to personalize it for the recipient. Next to God, his family was his #1 priority. He always made it to all of his children’s sporting events, and when his grandchildren became older, he attended their events as much as possible. He was a very kind, humble and loving person. Generally, he was very quiet, but once you got to know him, he could talk your ear off! He was always quick to tell a funny story or joke to those who would listen-willingly or not! Jim is survived by his wife of almost 49 years, Leslie; daughter Christina and her husband Bob Clark; daughter Kelly and her husband David Scheese, and son Scott. He is also survived by grandchildren Bobby, AJ and his wife Emily, and Hannah Clark, and Jakob and Stephanie Scheese, as well as great-grandson Colton Clark and a great-granddaughter Oaklynn, who is due in April. A public viewing will be held on Friday, January 14th from 3-5 pm at River Valley (Precht-Harrison) Funeral Home on Elmway. A Funeral Service will be held at the General Assembly and Church of the First Born at 88 Port Rd. in Brewster, Sat 1/15/2022 at 1:00 pm. A community celebration of life will be held in the spring. In lieu of flowers, the family requests that donations be made to the Okanogan Athletic Booster Club in his name.

James Douglas Todd, loving husband, father, and grandfather, was called home to the Lord on January 6, 2022. He was born on January 23, 1952 in McAlester, Oklahoma to Lewis and Hazel (Gordon) Todd. He was preceded in death by his parents,... View Obituary & Service Information

The family of James Douglas Todd created this Life Tributes page to make it easy to share your memories.

Send flowers to the Todd family.