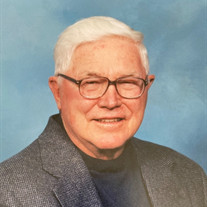 Lifelong Okanogan resident Howard Burnett passed away September 17, 2021 at Mid Valley Hospital. He was born October 31, 1927 to Earl and Emma Burnett of Okanogan. He spent his first seven years living in a house on second avenue, before moving to the family cattle ranch in Pleasant Valley in 1933. He attended Pine Grove School, then Okanogan schools, graduating from Okanogan High School in 1945. Following graduation, Howard joined the Marine Corps serving four years at the tail end of WWII. He was stationed in California, Hawaii, and Guam. He was trained in tanks and amphibian tractors, working in the jungle most of the time. After discharge from the Marines, he attended California Polytechnic State College at San Luis Obispo. His education was interrupted when he was recalled to active duty with the Marines for 13 months during the Korean conflict. Upon his second discharge from the Marines, Howard attended Washington State University. Howard married Gladys Simonson in 1953. They moved back to Okanogan and had three children, Debra, Gary and Gail Kathryn. Howard worked for several years at Columbia Concrete, then for the Unemployment Office. He was appointed Acting Postmaster by President Kennedy, then permanent Post Master by President Johnson. He held that position for 25 years.In addition to postal duties, Howard was also in charge of the Fallout Shelter in the Post Office Basement. Since the shelter could only hold 180 people, Howard was grateful that it was never used. He didn’t want to be in the position of turning people away. Howard and Gladys divorced in 1971. In 1974 Howard married Hazel Allen Stevens and welcomed her children Sherrill, Nancy and Kelly into the family. Howard was thrilled to instantly become a grandfather too! Howard retired from the Post Office in 1987. He became a full time cattle rancher and remained actively involved in the community. He was a long time member of the Okanogan Grange, Kiwanis, Elks, active in the Historical Society, and in the Senior Citizens. He was recognized for his fund raising efforts which resulted in the installation of an underground sprinkler system at the Okanogan City Cemetery. After selling the ranch to grandson Christopher Freel and wife Kimberly, Howard and Hazel lived in an apartment in Okanogan. A few years after Hazel’s passing, Howard moved to Apple Springs where he lived until his death. Howard was proceeded in death by his parents and brother Neil,wife Hazel, children Gary and Gail Kathryn Burnett, grandsons David Burnett, Scott and Matthew Phillips. His sister Janice Mitzner of Spokane passed away in December 2021. He is survived by his brother Daniel (Rilla) of Brier, WA. His daughter Debra (Greg) Wilson of Liberty Lake, daughter-in-law Nancy Burnett of Woodinville, children Sherrill (Galen) Tyler of LaConner; Nancy Phillips (Steve) of Malott; Kelly (Joy) of Mukilteo. Grandchildren Tyler (Michelle) Wilson, Samantha (Daniel) Victor, Cassandra Wilson, Ali (Rob) Seibly, Daniel Burnett, Dr Brian (Amy) Artman, Aaron (Leslie) Artman, Heidi (Mike) Ortiz, Christopher (Kimberly) Freel, Tawnia (Troels) Knox-Folmann, Scott (Robie) Knox, Lisa Phillips, Bryce (Julie) Stevens, Inga Darrow, Carly (Brian) Twiggs, as well as greatgrandchildren, nieces and nephews, all of whom he loved dearly. A Memorial Service will be held at 11:00 AM on May 21st at River Valley Funeral Home in Okanogan. A brief graveside with military honors will follow at the Omak Memorial Cemetery behind the funeral home on Elmway. Donations to the food bank are requested in lieu of flowers.

Lifelong Okanogan resident Howard Burnett passed away September 17, 2021 at Mid Valley Hospital. He was born October 31, 1927 to Earl and Emma Burnett of Okanogan. He spent his first seven years living in a house on second avenue, before... View Obituary & Service Information

The family of Howard Earl Burnett created this Life Tributes page to make it easy to share your memories.

Send flowers to the Burnett family.