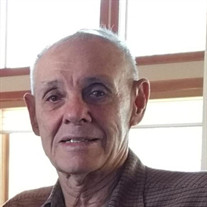 Henry Maurice Mulloy, known to his friends as “Bud,” was the last baby delivered by Grandma Black on the reservation in Monse, Washington to Marguerite Hannora Joy Mulloy and Henry Edwin Mulloy on May 7th, 1934. Tragically, Bud’s parents were both deceased by the time he was seven years old, leading to his subsequent raising by his aunt and uncle, Ellen and Les Flynn. Speaking of his early school days, Bud would say he did excellently, receiving a “C for Charming, D for Delightful, and F for Fun.” In his youth, he participated in local rodeos in pole bending. He met the love of his life when he transferred from the defunct Riverside High School to Omak High School. There, he patiently courted Norma Jean Berney, riding an “old gray mare” over the hills to visit her. They were married at the Omak Catholic Church on November 27th, 1954. Bud worked in the woods as a logger from 1954 to 1959 before settling in Brewster and working on his uncle’s cattle ranch from 1959 until he retired in 2001. Bud and Norma Jean raised three children in Brewster: Leslie, Jody, and Pat. During this time, Bud would be up before sunrise, tending to the many duties of ranch life, overseeing 500 head of cattle, feeding horses, and some nights with his flashlight at hand, helping along the birth of a calf. He was a lifelong member of the American Quarter Horse Association and enjoyed traveling with Norma Jean to Sundowns, Portland Meadows, Rimrock, Les Bois Park, Lone Oak, and Grants Pass Downs to watch one of his horses race—the most successful being Joe Bunny Bid. Bud and Norma Jean always had dingo dogs on their farm, many of them ill-tempered, as remembered by their grandchildren, with the exception of their last dingo, Bo—the sweetest dog they had, always ready to jump in the back of one of Bud’s trucks for a ride. Bud’s first and most reliable mode of transportation, in his words, “had a heated seat, could go through a foot of snow, and only needed a bucket of oats;” however, throughout his life, he developed a passion for having the latest and greatest trucks. He also got a kick out of having wells dug on his property. Though Norma Jean was the true baker in the family, a cherished Christmas tradition was the opportunity to eat Bud’s famous peanut butter fudge, which he diligently made every year. Bud will be remembered as a hardworking, principled, and dedicated family man, an absolute jokester, and a good friend and neighbor who was always willing to lend a hand, a pasture for cattle to graze in, or wisdom to help get a job done. His effortless charisma lit up any room he entered, and the laughter he inspired from a quick quip or a sharp story will not be forgotten. He is preceded in death by his mother, father, his sister Illene Baker, and twin sister Henrietta Mulloy. He is survived by his loving wife of 67 years, Norma Jean Mulloy, and he leaves behind decades of fond and colorful memories with his daughters Leslie (John) Martin and Jody (Tim) Lane, and son Patrick (Cathy) Mulloy. Bud is also survived by his seven grandchildren and nine great grandchildren, and the numerous friendships he cultivated. The family extends a heartfelt thank you to Bill Freel and Judy Jack for the care and attention each of them showed for Bud. A public viewing will be held at River Valley Funeral on Wednesday, April 13th from 5:00 p.m. to 7:00 p.m. A service to celebrate his life will be held on Thursday, April 14th at 11:00 a.m., also at River Valley Funeral. A graveside service at the Conconully Pioneer Rest Cemetery will immediately follow, with a reception to be held at the Conconully Town Hall after the graveside service.

Henry Maurice Mulloy, known to his friends as &#8220;Bud,&#8221; was the last baby delivered by Grandma Black on the reservation in Monse, Washington to Marguerite Hannora Joy Mulloy and Henry Edwin Mulloy on May 7th, 1934. Tragically, Bud&#8217;s... View Obituary & Service Information

The family of Henry Mulloy created this Life Tributes page to make it easy to share your memories.

Henry Maurice Mulloy, known to his friends as “Bud,” was the...

Send flowers to the Mulloy family.