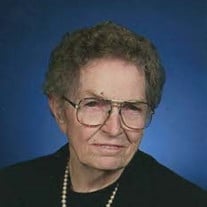 Evelyn passed away Jan. 4, 2022, at Mid-Valley Hospital at the age of 104 years. She was born in Richland County, Wisc., Dec. 11, 1917. She graduated from nursing school at Methodist Hospital in Madison, Wisc. in 1939, and attended the University of Wisconsin, completing more than 2 years of pre-med and medical school classes. In 1943, she met Russell Minnich (from Omak) at her aunt's home while he was visiting on leave from the U.S. Navy. They were married October 12, 1944. They briefly lived in New Orleans, then she stayed with her father and stepmother until Russell was discharged from the service in September 1945. He hitchhiked from Seattle to Wisconsin and arrived the night before their first child, Norene, was born. They moved to Omak in November of 1945. Their second child, Ralph, was born in Omak in 1947. In 1953, Evelyn was hired as the School Nurse for Omak School District, a job she held until 1970 when the position was eliminated due to a levy failure. She then taught nursing aide classes until she retired in 1974. She served as a commissioner on the Omak Hospital Board for the newly created hospital district from 1960 to 1980. During that time, the board was in charge of building the new Mid-Valley Hospital, which opened in 1966. After Russell retired, they traveled to many parts of the country and world and celebrated their 50th wedding anniversary on a cruise through the Panama Canal, where Russell had been assigned to a PT boat during his service. Russell passed away in 2002. Throughout her life, Evelyn's priorities included her Christian faith and service to others. She was an active member of Omak Community Presbyterian Church from 1946 to the present, where she sang in the choir and played hand bells. She was an avid fan of Gonzaga Basketball and was able to attend a game in Spokane to celebrate her 100th birthday. She was also a member of PEO. In addition to her two children: Ralph Minnich (wife Sunny) and Norene Harvey, Evelyn is survived by four grandchildren: Natalie Banks, Jennifer Minnich, Lindsey Beauregard, and Megan Minnich; five great-grandchildren: Orion Banks, Jordyn Bragg, Morgan Banks, Logan Banks and Adilyn Beauregard; and one great-great-grandson: Bodhi Bragg. The family expresses their appreciation to numerous family members, friends, businesses, and organizations who provided love, friendship, support and assistance to Evelyn throughout her life, and to Apple Springs and Mid-Valley Hospital for their skilled and compassionate care. A memorial service will be held at the Community Presbyterian Church of Omak at 11:00 A.M. Saturday, May 21st 2022. Family will lay Evelyn to rest next to her husband, Russell, prior to the memorial at 9:00 A.M. at the Okanogan Valley Memorial Gardens.

Evelyn passed away Jan. 4, 2022, at Mid-Valley Hospital at the age of 104 years. She was born in Richland County, Wisc., Dec. 11, 1917. She graduated from nursing school at Methodist Hospital in Madison, Wisc. in 1939, and attended the University... View Obituary & Service Information

The family of Evelyn Anna Minnich created this Life Tributes page to make it easy to share your memories.

Send flowers to the Minnich family.