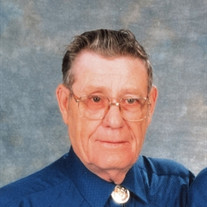 Ervin Ray Caveness, 88, Omak, WA, passed away at home surrounded by his family in Omak, WA on April 23rd 2022. He was born in Mason, Texas on January 13th 1934 to Ervin and Lois Caveness. He was raised in Mason, Texas followed by 2 years of military service he was honorably discharged from the Army in 1955. He went on to meet and marry Jeanie JoAnn Rice in Stockton, California on June 14th 1957. Between 1958 and 1964 they had their 4 children. Prior to moving to Washington Ervin and JoAnn owned and operated the Grange restaurant in Texas. In 1970 they moved to Washington where he begain work as a Rancher on the Lesamiz Ranch for many years. He then became a Jailer for Okanogan County Jail where he worked with his wife JoAnn. During these years they were the owners and operators of the Circus restaurant. After the jail he pursued a career as a Bail Bondsman in Okanogan, WA. In his retirement he worked as a greeter at Walmart in Omak, WA. After the passing of his wife JoAnn in 2005, he met and married Judith Webster in Omak, WA on April 14th, 2012. Ervin enjoyed fishing and hunting in his leisure time. As an animal lover he had many pets over the years, raising goats being one of his favorites. He spent many hours out on the lake with family fishing and making memories. As an avid reader, you could always find him reading his favorite western book. Ervin Ray Caveness is survived by daughter Lois Bertram and husband Neil of Oroville, WA; son Ervin “Ray” Caveness and wife Debbie of Wenatchee, WA; daughter Brenda Webster and ex-husband Mark of Omak, WA; son Jimmy Caveness and wife Jude of Okanogan, WA; sister Ann “Bebe” Staggs of Texas; Dawn Applebee of Okanogan, WA; Jim and Lois Rice of Omak, WA; 7 step children; 14 grandchildren; 34 great grandchildren, and 1 great great grandson. He was preceded in death by his parents, 1 brother Bill McDowell, 2 sisters, wife JoAnn Caveness and 2nd wife Judith Caveness. A memorial service will be held for Ervin Caveness at River Valley Funeral, Okanogan, WA, on Saturday May 7th, 2022 at 11:00am. A graveside service will follow at the Okanogan City Cemetery.

Ervin Ray Caveness, 88, Omak, WA, passed away at home surrounded by his family in Omak, WA on April 23rd 2022. He was born in Mason, Texas on January 13th 1934 to Ervin and Lois Caveness. He was raised in Mason, Texas followed by 2 years of... View Obituary & Service Information

The family of Ervin Ray Caveness created this Life Tributes page to make it easy to share your memories.

Send flowers to the Caveness family.