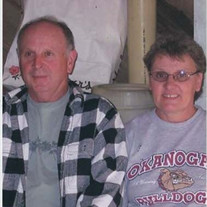 David (Dave, Popo) Otis Covey Sr. 80 of Omak, Wa, passed away on Sunday, February 13, 2022. Dave was born to Archie and Vera (White) Covey on January 23, 1942. He was the third of five kids. Dave attended and graduated from Omak in 1960. He married Dorothy E Buchanan on May 18, 1962. They had 2 children David (Dave, J.R.) Otis Covey Jr November 30, 1962 and Deborah (Debbie) Leann Covey on July 6, 1964. Dave worked for his father Archie at Covey’s Repair, Emil Kruse, Silverwheel Freight, Buck Golm Ford and Hank and Earl's Wrecking before going to Okanogan County Public Works as a mechanic, where he retired from in 2006. He was also a member of the Omak Fire Department for many years. Dave enjoyed working on various automobiles and basically anything that had a motor or moved. At one time he and his buddies, Clinton Watts and Jerry Gregerson, built their own race car a 1959 Chevy Belair and demolition derby car and raced at many of the local race tracks in the County. On June 19, 1999, he married Geralyn (Jer) Krebs of Omak, joined by her son, Dean Allen Zentner. They purchased their property up in Chesaw in 2003 and they enjoyed working on their property and getting to know their local neighbors. After retiring from the County, he would go with Jer on the Thursday Parts runs (Hamilton Farm Equipment/Washington Tractor) delivering parts mostly to the south area of the County, Malott, Brewster, Bridgeport, Pateros and Chelan, along the way acquiring more life long friends. Jer would bring vegetables from her garden, Dad would bring the jokes and in return they were given apples, cherries, pears and laughs. On a few of those runs, they came across some old Ford trucks, which turned into a passion. They restored a 1948 Ford F1 that they would take down to the Auto Show in Omak. He enjoyed pulling pranks, telling jokes and visiting with all their friends up and down the valley. Dave enjoyed hunting, fishing, camping, gold panning, metal detecting, yard sales and motorcycles. He enjoyed watching his grandchildren in their various sports. He was an avid Gonzaga Mens and Womens Basketball fan. Dave is joined in death by his wife Geralyn (Jer) Covey, preceded in death by parents Archie & Vera (White) Covey, brothers Bob and Perry Covey, sister Carol (Cookie) Covey. He leaves behind his son, David (J.R.) Covey and Nancy Erickson, daughter, Debbie (Covey) Springer, son-in law, Steve Springer, grandchildren Brooke Ashley (Springer) Richards, Brittney Richards, Rylan Patrick Springer and Nolan James Springer. Son, Dean Allen Zentner, grandchildren Grabrielle Shannon, Sophia Grace, Wyatt Dean and Rogan Jaxon Zentner and 1 brother Floyd Covey, wife Charlotte Covey. A Rosary and Mass will be held starting at 5:00 P.M., Friday, March 25th 2022 at the Our Lady of the Valley Catholic Church. Memorial Services will be on 11:00 A.M., Saturday, March 26th 2022 at the Okanogan County Agriplex. I lieu of flowers, please send donations to the Okanogan County Search and Rescue, Molson-Chesaw Fire District #11, Lost And Found Pets of Okanogan County, Okanogan Regional Humane.

The family of David Otis Covey created this Life Tributes page to make it easy to share your memories.

Send flowers to the Covey family.