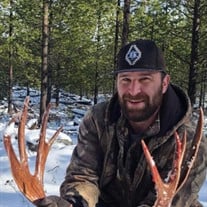 Chase Wayne Nicholson passed away unexpectedly, on New Year’s Day 2022 at his home. He was born to his loving parents, Wayne and Stacie Nicholson on December 24, 1984. Chase was a precocious child and learned to talk and walk before he turned 1. He was on an adventure of life from the very beginning. He learned to hunt & fish and he was good at it. He played baseball, basketball, soccer, golf and football. He loved to snowboard, ski, hike and anything adventurous outdoors. Some of his fondest memories was hitting a grand slam in baseball, slaying fish in Alaska, and hunting with his Dad and brothers. Chase went on many adventures that took him to Hawaii, Alaska, Wyoming, California, Canada, and all over Washington State. He knew the reservation like the back of his hand. One of his favorite places was Kodiak, Alaska. He had so many stories to share and his family loved to hear them all. Chase was a proud member of the Colville Confederated Tribes. He went to school in Omak and went to trade school to learn how to operate the boiler at the mill. He was a boiler operator and manager at CIPV until it shut down. He also worked for Silver Nickel Logging as a feller buncher operator and was very passionate about his job. He went to Alaska during fishing season and did numerous jobs and loved every second of it. He also worked different jobs throughout his life. Chase was really good at everything he did. He was mechanically inclined and quick to learn. His grandpa always wanted Chase to help him with projects as he was “an amazing kid”, “no one is like him”, my dad would say. Chase was an amazing brother to Keelee, Jacob and Josh. All the Nicholson kids were competitive and Chase could outdo them all. Chase was blessed with his greatest achievement and the love of his life when his daughter, Alison Jean Nicholson was born. He taught her to hunt and fish at an early age and they went on so many adventures together. To know Chase was to love him. There will never be anyone quite like him ever. He was so smart, kind, good looking and the best son parents could ask for. He was the best brother too! Chase leaves behind his beautiful daughter, Alison Jean, his parents, Wayne and Stacie Nicholson, his favorite sister, Keelee, his brothers, Jake and Josh, his grandmother, JoAnn Thomas. His nieces and nephews, Eric, Kason, Sophie, Everlee, Isabella, Hawke, Adley and Paisley. His uncles, Dean Nicholson and Terry Crim. His aunties, Kimberlee Moyer, Debbie Crim, Tammy Nicholson, Diane Crim and Cam Nicholson. Numerous cousins, friends and so many people he considered family. He is predeceased by his grandfathers, Judge James R. Thomas and Narcisse Nicholson, Jr., grandmother, Barbara Michels, brother, Ethan Joseph Nicholson, uncle, Mark Thomas and cousin, Rigo Nicholson. We would like his family and friends to join us to celebrate his life on January 8, 2022 at 11am at the Omak Longhouse, burial at the Ellisforde Cemetery and dinner to follow at the Omak Longhouse. All family, friends, kids, babies, and dogs are invited and we will say goodbye to our Chase and look forward to seeing him again one day.

Chase Wayne Nicholson passed away unexpectedly, on New Year&#8217;s Day 2022 at his home. He was born to his loving parents, Wayne and Stacie Nicholson on December 24, 1984. Chase was a precocious child and learned to talk and walk before... View Obituary & Service Information

The family of Chase Wayne Nicholson created this Life Tributes page to make it easy to share your memories.

Send flowers to the Nicholson family.