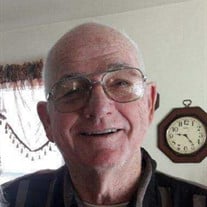 Bobbie Joe Fenison, 87, Riverside, WA, passed away quietly in his sleep at his home in Riverside, WA on March 25th, 2022. He was born in Bunn, Arkansas on May 2nd, 1934 to Alexander and Elva Fenison who moved to Washington when Joe was 12 years old. Raised in Omak, Joe graduated from Omak High School, and married Ruth Elaine Swartz in Chewelah, WA on September 3rd, 1954. He earned his Bachelor of Arts at Roberts Wesleyan College, was honorably discharged from the Army. A self-proclaimed, “Jack of all trades and master of none,” Joe’s first job was his favorite, working as an agent telegrapher for the SNPS Railroad. He went on to become a pastor, teacher of the deaf, insurance and real estate salesman. He built and repaired houses, operated two adult family homes with Ruth, cultivated one of the best backyard gardens in Omak, taught everything he knew to everyone who listened, and had a way to fix just about anything. Joe was deeply involved in several churches throughout his lifetime. Born into Southern Baptist, he became a Free Methodist on marrying Ruth, became a Nazarene pastor, then attended Assembly of God as well as Baptist and Free Methodist congregations. Ministry, song-leading and teaching were ever on his mind, and he was instrumental in bringing many souls to the Lord. The last duet he sang with his daughter he wanted everyone to hear in tribute to the “Arkansas boy who was governor of the united states of washington!” (his words in his dementia): https://youtu.be/AB428nktZVo Bobbie Joe Fenison is survived by his wife Ruth Fenison of Riverside, WA; one brother, Fred Fenison of Lexington, KY; one daughter Roberta (Fenison) Donnor of Vancouver, WA; two sons, Burton (Jim) Fenison of Morton, WA, and Steven Fenison of Okanogan, WA; twelve grandchildren, and fifteen great-grandchildren. He was preceded in death by his parents, four brothers, and one grandchild, Benjamin Fenison. A memorial service will be held for Bobbie Joe Fenison at River Valley Funeral Home, Omak, WA, formerly Precht-Harrison-Nearents Chapel at 1:00 p.m. Saturday, April 23, 2022 (2547 Elmway St, Okanogan, WA 98840). Services are open to the public with a fellowship/potluck to follow at River Valley Funeral.

Bobbie Joe Fenison, 87, Riverside, WA, passed away quietly in his sleep at his home in Riverside, WA on March 25th, 2022. He was born in Bunn, Arkansas on May 2nd, 1934 to Alexander and Elva Fenison who moved to Washington when Joe was 12 years... View Obituary & Service Information

The family of Bobbie Joe Fenison created this Life Tributes page to make it easy to share your memories.

Send flowers to the Fenison family.